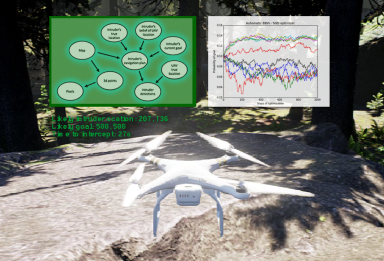 If you knew what I was going to do next, how would your actions change?

Theory of mind describes an agent’s ability to model the intents, beliefs or desires of others – A difficult task because the agent’s mental state is hidden and can only be approximated using observations. This process produces high levels of uncertainty.

In our laboratory, we’re applying the concepts of theory of mind to improve the autonomous decision making ability of a UAV executing an intruder detection task. A naive UAV could employ a simple search pattern, scanning the city in a grid-like path. But even a moderately sophisticated intruder would try to construct an escape route that would avoid detection from a grid-search. Ideally, our UAV should take this knowledge into account. But the intruder might also be reasoning about the fact that the UAV is reasoning about him. This “battle of wits with a Sicilian” only ends when either the agent or the intruder is exhausted.

We apply probabilistic programming to this problem and show that theory of mind greatly increases the UAV’s ability to catch a naive intruder.